EVERY county of Ireland has its own coat of arms, whether officially granted or through heraldic tradition.

In the majority of cases these crests are actually drawn up by the Government before being assigned to the counties themselves.

All but one county council in Ireland – that being South Dublin – has its own personalised ‘coat’.

GAA colours often accompany symbols of dragons, ships and other emblems representing the heritage of the various counties.

Here are the 32 Irish counties, their coat of arms and where they come from… 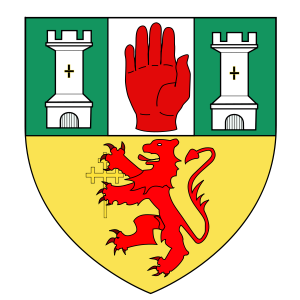 The shield is divided into green and alternate waves of white and blue, symbolising the rural areas and Lough Neagh and Six-Mile-Water.

On the base stands a castle gateway like that leading to the Castle at Antrim, and behind it rises the Round Tower.

Two gold sheaves of barley, each behind a gold shuttle, flank each side of the castle referencing the ancient linen-making and more modern textile industries. 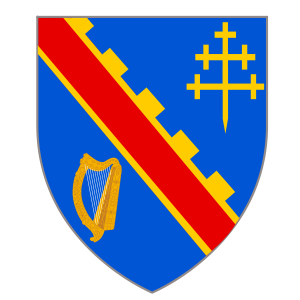 Both the colour and harp featured in Armagh’s coat of arms are based on both coats of arms used to represent Ireland.

Sometimes Armagh’s arms has been depicted as green, identical to the arms of the Province of Leinster. These arms have appeared upon Northern Ireland bank notes representing the county.

Motto: “In Council is Wisdom” 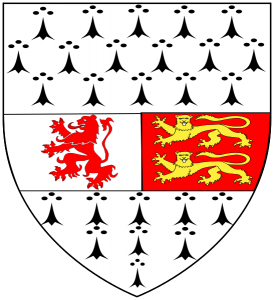 The arms have strong associations with the Butler family.

The two English lions signify that the Butlers held their land from the English crown.

Motto: Carlow is the only Irish county without an official motto. 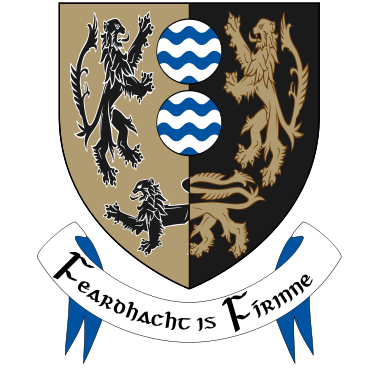 The themes represented in the arms of are the local lordships in Gaelic times of the O’Reillys and the O’Rourkes.

Physical feature of the county, that is its many lakes, is represented by the inclusion of two heraldic roundels indicating water. 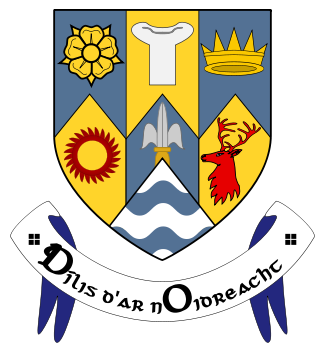 The coat is specifically designed to convey the effect of both the flat and craggy landscape of the county.

The six compartments into which the shield is divided are intended to represent the six ancient areas – Dal gCais, Clann Cuilean, Ui Caisin, Corcumrua, Corca Baiscinn and Ui Breacain.

The wavy effect at the base of the shield suggests the River Shannon that is a boundary feature for so much of the county.

Motto: “True to our Heritage” 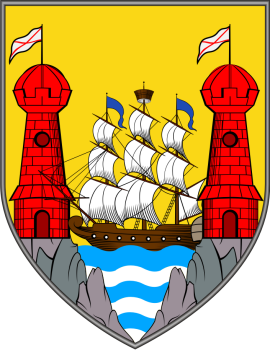 On waves of the sea a ship of three masts in full sail represents the county’s maritime heritage.

The two red tower gules symbolise Cork City itself and its reputation as a metropolitan centre and harbour.

The white flax flower is representative of the many flax fields found throughout the county.

The wheat is representative of the plentifulness of Derry’s land.

Motto: “Help Comes from the Lord”

The arms are symbolical of both the nature of the county and its history. The wavy bars represent the green hills and golden strands, while the small shield in the centre stands for the ancient Kingdom of Aileach.

The crest above the shield displays a dove for St. Colmcille.

County Down’s arms feature a number of symbols. The stags symbolise peace and harmony between the county’s Catholic and Protestant communities.

The fish, waves and ship represent the county’s rich maritime heritage, especially the cities of Downpatrick and Belfast.

Motto: “Nothing Without Labour”

The arms feature the Viking raven badge. This signifies that Dublin was founded by the Vikings.

The raven stands on a hurdle, signifying the origin of Dublin’s Irish name “Baile Átha Cliath” or “Town of the Hurdle Ford”.

The name Dublin comes from An Dubh Linn, or black pond.

Motto: “Action according to our word”

The knight in the crest is from the coat of arms granted to the Maguire family in 1586.

Motto: “Country of the Lakes”

The arms depict the Galway Hooker, the reddish sailed boat traditionally associated with the county.

Galway is a maritime county, and that fact is represented by the ship and waves.

The arms are in the familiar green and gold sporting colours of the Kingdom.

The blue and white dancetty bar symbolises the county’s mountains, the highest in Ireland.

The crown stands for the Ciarraige, the pre-Gaelic population who gave their name to the county.

The two crosses are for the monasteries of Ardfert and Aghadoe.

The design is completed by a representation of the boat of St. Brendan the Navigator. In this boat legend has it that he discovered America.

The harp is the symbol for the fianna, a legendary group of warriors from Celtic mythology who supposedly had their headquarters in Kildare.

The cross is the saint Bridget’s cross; Saint Brigid lived in a monastery in Co. Kildare.

The horse’s head symbolises the horse-breeding tradition of Kildare while the acorns are taken from the Irish for Kildare (cill dara) which means the church of the oak tree.

The arms represent the family of Butler, out of whose estates the present day Co. Kilkenny was carved.

The fess or broad band across the centre of the shield contains the arms of two families, one Gaelic, the other Norman, thereby signifying the historic and harmonious fusion of these two great Irish traditions within the county.

The silver garbs or sheaves on a black field heraldically represent Dermot MacMorrough, King of Leinster, while the gold fret on red is associated with the family of Den or de la Denn.

The inverted V’s rising towards the top of the shield represent the Slieve Bloom Mountains and the Rock of Dunamaise.

Seven spots represent the seven leading families or ‘tribes’ of Laois. White and blue represents the rivers Nore and Barrow.

The lion rampant in base is that of Ó Mordha, Kings of Laois.

The background is gold, the colour of the Ó Mordha lion and the stars.

Motto: “Together with the People”

The shield has been divided to recall the gentle hills characteristic of much of the county.

The lion represents the O’Rourke family and in the lower part are placed three fountains, representing the lakes of the county.

Motto:” Be You Faithful”

The Celtic cross is for the many churches of the county and can be seen as the city surrounded by the countryside.

The crest depicts Patrick Sarsfield Irish commander at the Siege of Limerick.

The two towers featured in Co. Longford’s coat of arms represent the two traits of its motto, strength and loyalty.

The greyhound is often used in Irish folklore and particularly in Gaelic poetry and mythology, and represents courage, vigilance, and loyal fidelity.

The lower section of the shield is intended to represent the rural areas of the county. For this reason it is coloured green. The hand indicates the right hand of God.

The chief stands for the urban areas of the county, namely the two towns of Drogheda and Dundalk.

The black colouring of the chief commemorates the Muirtheimne or darkness of the sea – the Old Irish name for the sea off the Co. Louth coast. The ships are two in number for the two towns of Drogheda and Dundalk.

The crest features a sword as symbol of law and order between two ears of barley, because of the importance of agriculture to the county.

Motto: “Master of all Arts”

The word Mhaigh Eo means “the plain of the Yew Trees” and the nine yew trees express that fact with one for each barony of the county.

The Patriarchal Cross (a cross with two bars) symbolises the Catholic Archdiocese of Tuam, and the three Passion Crosses represent the other three Catholic dioceses in Mayo, i.e. Achonry, Killala and Galway-Kilmacduagh-Kilfenora.

Mayo is a maritime county, and that fact is represented by the ship and waves.

The apparition at Knock is represented by the rose surmounted by a crown at the top of the crest.

Motto: “God and Mary be with Us”

The antique Irish crown placed in the centre of the shield symbolises ‘Tara of the Kings’ Newgrange, regarded as the finest achievement of the Boyne Valley civilisation.

The salmon in the base represents the bradan feasa or “Salmon of Knowledge” legend.

The arms are based on an ancient history of Monaghan from the 11th century “Book of Rights”.

The green, white and gold are the sporting colours of the county.

The gold lion symbolises the Ui Failbhe, the Laiginian people after whom the county is named.

Motto: “Be You Faithful”

On the green area is placed a cross, as a recollection in general of Saint Coman, and the Abbeys of Roscommon and in particular of the association of the cross of Cong with the county.

The antique crown below recalls Rathcroghan, where, according to Mac Firbis, “most of the kings of the race of Hereman were buried”.

The ram’s head represents the County’s importance as a centre of sheep-rearing.

The design represents the literary and cultural history of the county – the cross referring to such early material as the Book of Ballymote and Lecan, and the rose to the poetry of W.B. Yeats, in whose work the red rose was a significant theme.

In the lower part of the shield is placed a boar’s head, in recollection of the episode of Diarmuid and Gráinne.

The arms show the arms of the Butler family, Earls of Ormonde.

Motto: “The Golden Vale of the Suir”

The ‘fleur-de-lis’ at the top of the crest is indicative of the county’s connection to the British royal family.

Motto: “By Wisdom and Prudence”

The round tower symbolises Saint Declan and recalls the celebrated monastic foundation at Ardmore.

The ancient Déise people are represented by the eagle’s head with three ears of wheat in his mouth, being the ancient crest of a Faolain, principal family of the Déise.

The stag’s head with the cross of Saint Hubertis taken from rest of the great Hiberno-Norman family of Power.

The word lymphad actually comes from the Irish long fhada, and is a common charge in Gaelic heraldry.

Motto: “May the Déise remain with Decian forever”

The swan represents the legend of the Children of Lir, a classic fairytale of children turned into swans. The swan-shaped Lough Derravaragh, the supposed site of the transformation, is located in the north of the county.

The charge in the lower azure field is a Norseman’s helmet.

The lions representsome of the old ruling families in the county such as the Maelechlainns, the MacGeoghegans and the MacCauleys.

The gold collar or ring is a symbol of union and fidelity, the ring also represents the central geographic location of the county in Ireland.

The azure upper and lower quarters represent the water of the more than ten lakes that give Westmeath its reputation as the Lakeland County of Ireland.

The arms are in the county’s sporting colours of purple and gold.

The lion with an axe reminds us that the Norman invaders of Ireland first set foot here, and that Wexford town itself is a Viking foundation.

The spear heads recall the pikemen of the 1798 revolution which reached its height in the county.

The lighthouse reminds us of the county’s maritime connections in particular the major port at Rosslare.

Motto: “An Example to Ireland”

The arms depict the Round Tower at one of Ireland’s early monastic settlements, Glendalough, the Wicklow Mountains and the area’s forests.

The dragon is a typical heraldic symbol denoting power and prestige.

Back to top
We use cookies to ensure that we give you the best experience on our website. If you continue to use this site we will assume that you are happy with it.
OK, Got it